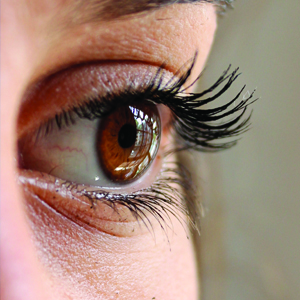 Dry eyes can be very uncomfortable. People with dry eyes complain of burning, grittiness, redness, and (ironically) excessive tearing. For these people, wearing contact lenses may be irritating, or even impossible.

Myriad medical conditions may lead to dry eyes, including:

In addition, the tendency to drink less water as we age, the dependence on soft drinks for fluid replacement, local water shortages, and hot, dry weather may all lead to dehydration in the eyes.

Behavioral and environmental issues are also contributors, such as:

Tears are comprised of three different types of secretions:

Most of the products sold over-the-counter to treat dry eyes only replace the watery portion of tears and must be used with great frequency.

Hormones to the Rescue?

It is becoming more apparent that disorders of the oil-producing meibomian glands may be the reason behind up to 75% of the complaints of dry eye diseases. Research (and even United States patents) point to the lack of androgens, such as testosterone and DHEA, as the underlying problem with oil production in tears. Androgens control lipid production of the sebaceous glands in the body, including the meibomian glands. Eye drops and ointments or gels to be used around the eyes containing testosterone or DHEA have been the focus of studies, and have produced encouraging results.

Postmenopausal women tend to be more afflicted with dry eyes than men of the same age, which suggests that estrogens may be a contributing factor in dry eyes. However, the subject becomes much more complicated when considering different types and amounts of estrogens, estrogen mimics, xenoestrogens, and disturbances in estrogen metabolism. For example, a study published in the British Journal of Obstetrics and Gynecology (BJOG) involving a group of postmenopausal women found that estradiol drops were effective in relieving dryness, reddening, excessive blinking, itching, and feelings of foreign bodies among women in one group, while the oral estradiol valerate in the artificial tears group was not sufficient to relieve their symptoms. Another study evaluated tear production throughout the menstrual cycle and found that there were significant changes associated with hormonal fluctuations. However, dryness and inflammation seemed to be the most significant during estrogen peaks.