The Evolution of Compounding 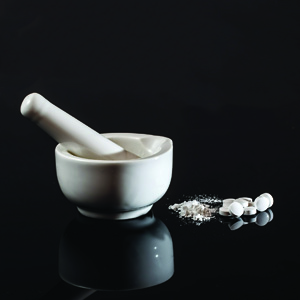 In primitive societies, the healing arts were a combination of sorcerer, priest, and medicine man—someone armed with magic rather than medicine. As practices of pharmacy and medicine evolved, the preparation of “therapies” often predated even the naming of the therapy. Ancient healers may have known “what” substances to use, but lacked the knowledge and equipment to understand “how” or “why.”

Some of the earliest medical texts were written around 2100 B.C., describing the use of oils, alcohols, wines, fats, honey, and more as remedies for various ailments. A 7th century B.C. collection of remedies provides evidence of approximately 250 drug substances of vegetable origin, 120 of mineral origin, and 180 of other origins.

Fast forward to the Persian world where vast medical developments involved the weighing and measuring of materials and the introduction of syrups, confections, and plant oil extractions. The physician and philosopher Avicenna unified all known medical science into The Canon of Medicine in 1025 A.D. Translations of this text into Latin eventually brought this knowledge to the western world.

Medicine and pharmacy (as well as other practices) have their roots in the medieval guild system, which protected artisans with a particular expertise from competition or exploitation. Guilds also served to enforce standards of their respective crafts. In 1240 Emperor Frederic II of the Holy Roman Empire decreed that the guilds of pharmacy and medicine would be separate, a division of authority that would prove to have long-reaching consequences.

The practice of pharmacy continued in essentially the same way until the Industrial Revolution. Rapid advances in technology greatly impacted pharmacy, as some medications lent themselves to the increased efficiencies of manufacturing. These products could be manufactured identically and in larger quantities, making the process less expensive and more easily standardized compared to medications made for specific patients’ needs.

In 1820, the United States Pharmacopeia (USP) was established to promote the standardization of formulas. While compounding was still the most prevalent way of formulating medications, it became less common as the pharmaceutical industry began providing standardized doses and dosage forms.

Another benchmark in the evolution of pharmacy in the U.S. occurred in the 1870s, when patent and trademark laws allowed companies to advertise to ensure the creation of markets for manufactured products. Unfortunately, anything could be promoted and advertised without needing to verify its effectiveness. This led to the passage of the first Pure Food and Drug Act in 1906, which was later replaced by the Food, Drug and Cosmetic Act in 1938. Among other things, the Pure Food and Drug Act prevented mislabeled and contaminated products from being sold in interstate commerce.

The first third of the twentieth century ushered in more radical changes in manufacturing that affected the practice of pharmacy. Chemistry and biochemistry had advanced such that new molecular entities could be created. The emergence of antibiotics, chemotherapeutic agents, hormones, radioactive agents, and vaccines created new fields in pharmaceutical science. While pharmacists were still using a broad knowledge of compounding to serve their customers, by the 1920s the so-called “patent medicines” accounted for approximately 20% of their business.

The traditional art of compounding began to fade away. By the 1960s, the concept of a “clinical pharmacy” had taken hold. Pharmacists became more focused on dispensing drug products in consultation with patients and practitioners, rather than being tied to creating preparations. Compounding coursework was minimized or eliminated from the professional curricula. Many in the profession considered compounding to be outmoded.

The formation of the Professional Compounding Centers of America (PCCA) in 1981 arose from the recognition that manufactured medications could not always meet individual patients’ particular needs. Some pharmacists embraced the challenge of individualizing treatments instead of dispensing manufactured, one-size-fits-all medications.

Revolutionized technology accompanied this resurgence of compounding. The tools for compounding pharmacists evolved beyond mortars, pestles, and balances to automated mixing devices and precision electronic balances, allowing for the creation of smaller batches of individualized preparations.

The FDA and Other Challenges

The compounding revival encountered its first sign of things to come in 1989 with an internal document from the Food and Drug Administration (FDA), stating its intention to regulate pharmacy compounding. By 1992, the FDA issued its first Compliance Policy Guide regarding compounding and began to inspect pharmacies.

To sidestep the limitations imposed by statute, FDA inspectors enlisted the aid of state pharmacy inspectors to conduct their visits. The FDA applied regulations intended for manufacturers to compounding that were not legally required and not appropriate in the context of a pharmacy. The results of these inspections were often citations and warning letters.

The FDA Modernization Act (FDAMA) of 1997 extended regulations to allow FDA oversight of pharmacy compounding. In the following years, a profusion of lawsuits, petitions, and challenges ensued before pharmacy and medical boards, Congress, the FDA, and consumer groups. The compounding pharmacy industry responded by forming the International Academy of Compounding Pharmacists (IACP), to represent their segment of pharmacy practice. On April 29, 2002, in Thompson vs Western States Medical Center, the Supreme Court of the United States held FDAMA’s prohibitions on soliciting prescriptions for, and advertising, compounded drugs amounted to unconstitutional restrictions on commercial free speech.

Traditionally, healthcare practice had been the responsibility of individual states to regulate, so the FDA’s actions were unprecedented in that a federal agency was crossing into the states’ regulatory arena. Many states made changes in their Pharmacy Practice Acts to include regulation of pharmacies that sent prescriptions into their states. The USP made changes to their compendia, in addition to making their recommendations for processes and procedures enforceable upon the practice, particularly upon pharmacy compounding. Professional pharmacy organizations also came together to found the Pharmacy Compounding Accreditation Board (PCAB), a voluntary quality accreditation for the compounding industry, now offered by the Accreditation Commission for Health Care (ACHC).

Yet regulations and safeguards did not prevent the tragedy that occurred between May and October of 2012. The New England Compounding Center (NECC) sent out preparations that infected patients with fungal meningitis and caused over sixty deaths. It was established later that NECC was operating in violation of the Massachusetts Pharmacy Practice Act by sending thousands of vials of methylprednisolone to practitioners and hospitals without patient-specific prescription orders.

Both the State of Massachusetts and the FDA had previously inspected and found problems with NECC, and both had failed to take action. Many in the industry pointed out that adequate regulation was already in place—the regulators had simply neglected to enforce it. In spite of this, there was still a public outcry for more regulation of compounding pharmacy.

The Drug Quality and Security Act (DQSA) was signed into law on November 27, 2013, to amend the Food, Drug and Cosmetic Act. Many of the provisions of the earlier act under FDAMA were restored, including but not limited to:

The intent of Congress in passing this act was to prevent future incidents such as the one that happened at NECC. Congress did not propose to eliminate access to consumers for office-administered therapies, to restrict shipping of patient specific medications across state lines, or to have the FDA inspect compounding pharmacies using regulations intended for manufacturers. In fact, Congress made their intent perfectly clear with language included in the Congressional Omnibus bill, HR244, that was signed into law in May 2017 (see box on the right, Summary of Congressional Omnibus Bill HR244). However, the FDA continued to ignore congressional intent in its application of the DQSA.

In spite of the fact that Congress has instructed the FDA to release new guidance to allow 503A pharmacies to compound for office use, and that some states already have regulations permitting the compounding of medications for practitioners to administer to patients in their offices, the FDA continues to contend that this is not allowed.

Another area of concern is the Pharmacy Compounding Advisory Committee (PCAC) the FDA created to consult when determining the list of substances which may or may not be compounded. The DQSA requires this committee to include representatives from the National Association of Boards of Pharmacy, the USP, as well as pharmacy, physician, and consumer organizations, and other experts selected by the FDA. At the time of this writing, the Pharmacy Compounding Advisory Committee includes only one compounding pharmacist in a non-voting position.

Yet another issue is the recent restoration of the FDA’s charge to create memoranda of understanding with each state. This will determine the conditions governing the rights of compounding pharmacists to send their preparations into another state. Without a memorandum in place, the law limits the distribution to 5% of total prescription orders distributed. With a memorandum in place, a state could only allow distribution up to 30%. The FDA contends that this limitation applies to patient-specific medications as well as medications compounded to be used for office use, even though the term distribute should not apply to patient-specific medications.

The language included in HR244, signed into law in 2017, calls on FDA to do the following:

In short, Congress has clearly stated that the FDA is misinterpreting the DQSA in compounding policies and overstepping their regulatory authority, and directs the FDA to change their DQSA policies to align with statute and the congressional intent expressed in the report.

Lastly, the FDA continues to inspect and issue citations and warning letters based on current Good Manufacturing Practices (cGMPs), even though compounding pharmacies are not drug manufacturers and should not be inspected as such.

However, there may be a light at the end of the tunnel. On June 12, 2017, Congressmen Morgan Griffith (VA) and Henry Cuellar (TX) introduced HR 2871, Preserving Patient Access to Compounded Medications Act of 2017 (see box below, Urge Your Representatives to Cosponsor HR2871). This important bill is a bipartisan effort that will preserve patient access to vital compounded medications and help clarify the DQSA in a way that will better align the statute with congressional intent and better balance public safety and patient access. The bill is currently in the Subcommittee on Health in the House of Representatives and had 42 cosponsors as of the time of this writing.

Compounding Pharmacies in the Present Day

As pharmacy law changes, the practice of compounding will also evolve. The USP has already begun standardizing some of the most commonly-used formulas. Compounding pharmacists bridge an important gap by preparing formulas that manufacturers are temporarily unable to supply (or choose not to supply because they don’t generate enough profit).

The evolution of compounding is geared up with twenty-first century technology, and compounding pharmacists stand ready for the challenges ahead. Methods of healing have changed dramatically throughout history, and yet the primary goal is the same. From the ancient medicine man to today’s physicians and pharmacists, the health of the patient always comes first.

Urge Your Representatives to Cosponsor HR2871

The Preserving Patient Access to Compounded Medications Act of 2017 (HR2871) will:

For more information on the background of this act and how you can get involved in protecting your ability to choose personalized medicine, visit Women’s International Pharmacy’s page Listen Up!