How Hormones Influence Our Minds

Deteriorating brain health is usually diagnosed based on problems with cognition or memory. Dr. Elisa Lotter explains that cognition includes memory, and is “a general term that refers to the ability to know, which includes all types of perceiving, recognizing, thinking, learning, reasoning, problem-solving, imagining, mental clarity, and the ability to concentrate and focus.” Cognition also includes verbal and visual/spatial memory, speech and language skills, and higher-order intellectual thinking.

Even with today’s emphasis on health and fitness, improving and maintaining brain health is often overlooked. While there is still much to discover about how the brain works, a basic understanding of its different components and their roles is necessary for improving brain health.

How the Brain Works

The components that make up the brain consist of billions of nerve cells called neurons (see Cerebral Cortex diagram). Each neuron has branchlike tentacles, called dendrites, for receiving information and a tail-like tentacle, called an axon, for sending information. The dendrites and axon of one neuron reach over to—but do not quite touch—other neurons. The spaces between the neurons are called synapses. Each neuron has many dendrites, providing a huge number of potential connections. 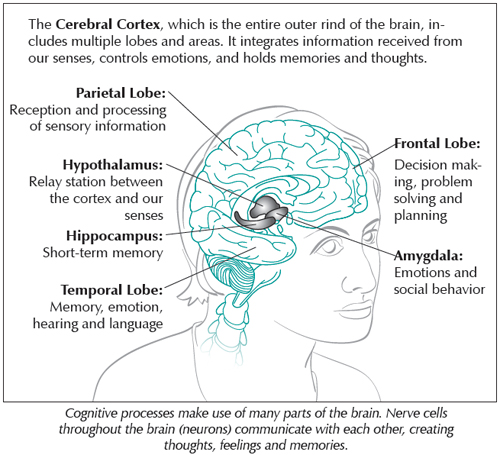 Brain cells communicate with each other by releasing chemicals called neurotransmitters, which relay information between brain cells. According to Dr. Edward Klaiber, neurotransmission is “the scientific name for the brain processes that determine how we think, feel, and behave.”

There are many different kinds of neurotransmitters, but researchers have identified only about 50 of them so far, including:

Dr. Gayatri Devi explains that these chemicals “either excite or depress the cells they reach” and that they exist in an intricate balance, “constantly being released and broken down.” 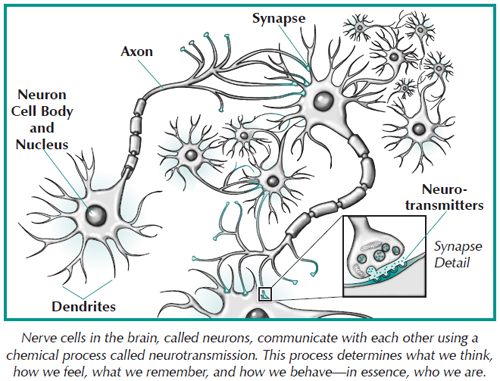 How Nutrients Affect the Brain

The brain is significantly affected by what we eat. In Your Miracle Brain, Jean Carper explains that “brain cells are even more sensitive than other body cells to nutrients and dietary chemicals which determine at any moment how your brain functions or malfunctions.” Optimal conditions for neurotransmission provide the basis for healthy mental functioning, but certain food choices may adversely affect these conditions and consequently affect brain health.

When brain cells do not get the nutrients they need, neurotransmitter production and processing are affected almost immediately. Activity levels and thought processes begin to slow down. On the other hand, when brain cells get too much glucose (a primary brain nutrient), we experience an immediate “sugar high,” causing both body and brain to go into overdrive, for a short time, usually followed by a “crash” or low period of energy.

Memory loss is one of the most common complaints and fears of aging. As we age, we typically need more time to remember things and our ability to concentrate tends to diminish. This is called Mild Cognitive Impairment (MCI) and may be exacerbated by poor nutrition, dehydration, and hormone imbalances, among other things.

Long-term or chronic imbalances, especially hormone imbalances, may lead to serious problems. In her book Menopause and the Mind, Dr. Claire Warga identifies myriad brain-related symptoms associated with what she calls “hormonal misconnection syndrome,” including:

Dementia (sometimes referred to as senility) is the gradual deterioration of cognition to the point that it interferes with daily living. It is caused by diseases that affect the brain and not necessarily the outcome of aging. Dementia may influence many aspects of mind and behavior, including:

Physician and researcher Dr. Dale Bredesen demonstrated that dementia and Alzheimer’s are more than a single disease. He identified 36 pathways that lead to impairment of cognition, grouping them into three major categories:

In The End of Alzheimer’s, Dr. Bredesen defines the optimal ranges for test results and details how to evaluate and remedy each of the 36 pathways. Evaluating and optimizing hormones is an essential component of his treatment program.

“Estrogen, progesterone, testosterone, and the thyroid hormones are as essential to our moods and cognitive abilities as food-based nutrients are to our basic cellular function,” according to Dr. Klaiber. Concentrations of some hormones may be higher in the brain than in the bloodstream, including:

Research indicates that nerve cells in the brain (and central nervous system) produce their own supply of these hormones (i.e., “neurosteroids”), independently of hormone production by the ovaries, testes, and adrenal glands.

Because hormones are often more concentrated in the brain, any hormone imbalance may dramatically affect brain function. In The Hormone Solution, Dr. Thierry Hertoghe notes that the most common brain-related symptoms—including memory loss, poor concentration, and confusion—are exhibited by patients who are deficient in specific hormones such as:

The estrogen hormones—primarily estrone, estriol, and estradiol—offer significant health benefits. The estrogens have profound effects on brain health in both men and women, including:

Dr. Barbara Sherwin has researched hormonal effects on cognitive function, especially in older women, and reports that “several studies have shown that estrogen replacement therapy reduces the incidence of Alzheimer’s disease in older women.” Dr. Sherwin also states that “What estrogen seems to do is to prevent some of the decline in the ability to learn and remember new material after menopause.” Along the same line of reasoning, Dr. Phyllis Bronson observes that estradiol, specifically, seems to exhibit the greatest influence on retaining brain health, as key areas of the brain that respond to estradiol stimulation are responsible for attention and memory.

Testosterone fortifies muscles, arteries, and nerves, including those in the brain. Testosterone’s effects are generally more profound in men, while estrogens tend to be more effective in women. However, in both men and women, each of these hormones plays a role to some degree in promoting health, including cognitive function and memory.

According to Dr. Hertoghe, studies show that men and women “who have better spatial memory (which allows precise movements in space, such as handling tools or dancing) have higher levels of testosterone than their peers. Women who excel in mathematics have also been found to have high testosterone levels.” In contrast, he explains the potential consequences of testosterone deficiency:

[The] arteries in the brain weaken, growing too soft in some places (increasing the risk of blood clots and stroke) and too stiff in others (increasing the risk of high blood pressure and cerebral hemorrhage)—none of which is good for the memory! When the arteries of the brain wear out, blood can no longer properly circulate there or to any organ. When the resulting lack of oxygen and nutrients to the brain is chronic, memory weakens.

In the brain’s gray matter, where thinking takes place, the blood begins to flow more slowly as thyroid levels decline. As a result, less oxygen and fewer nutrients reach the brain cells, the brain becomes malnourished, and the brain’s owner thinks and moves less. … Without enough thyroid hormones, the number of connections (dendrites and synapses) between the brain cells decreases, weakening the brain cells.

Fortunately, this process may be reversed with proper treatment. Taking thyroid hormones typically accelerates blood flow to and throughout the brain. Correcting the imbalance provides neurons with sufficient oxygen and nourishment, which gradually improves neurotransmission, often leading to clearer thinking and better memory.

Pregnenolone is the most abundant hormone in the brain and is concentrated about 75 times greater in the brain than in the blood. It serves as a precursor to many of the other hormones, so even a slight deficiency can have a domino effect on other hormones. Dr. Hertoghe calls pregnenolone “the memory hormone” because of its astounding ability to improve memory; research has shown that pregnenolone works as a neurotransmitter to clarify thinking, promote concentration, and prevent memory loss.

According to Dr. Dharma Singh Khalsa, an “optimal brain” is the result of a series of personal choices. While he has been able to restore memory and cognition, and even enhance mental functioning in some of his patients, he believes that most memory problems are not really “memory loss” but rather a result of the brain’s inability to create a strong memory in the first place. In his book Brain Longevity, Dr. Khalsa outlines a multifaceted lifestyle program to address brain health, including:

We used to think that brain cells grew as we developed, leveling off at some point in adulthood, and declining with age. For many people, their greatest fear is losing their mind or memory as they age. The good news is that research indicates that we may effectively improve cognitive function, even in our later years.

“For the first time in human history, scientists are beginning to understand how profoundly a person can influence the factors that control brain functioning,” writes Carper. This means that it is never too late to take steps to improve brain health.