It Takes a Lot of Gall

The Impudence of the Lowly Gallbladder

The word “gall” may be derived from “ghel” meaning golden yellow, which is the color of bile held in the gallbladder. “Gall” is synonymous with emotional words such as: bitter, angry, choleric, impudent, bold, annoying, or cruel. Some believe that bile is one of the four “humors” first described by Hippocrates and it was thought an excess of golden bile would create a choleric temperament. 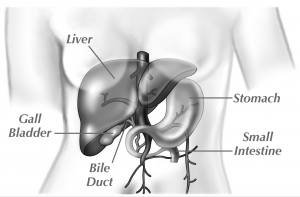 The gallbladder, which holds this golden bile, is a small pear-shaped sac located just below the liver. Its purpose is to hold the bile fluid produced by the liver and release the accumulated bile in response to signals produced by certain foods. After a meal, the gall bladder becomes flattened as it empties its fluids into the small intestine. WebMD declares the gallbladder to be a non-essential organ and states there is little difference to your health if it has been removed.

However, when a gallbladder “attack” occurs, many patients experience considerable pain and suddenly we are forced to consider this otherwise quiescent organ. Given the large number, about half a million, of cholecystectomies (gall bladder removals) performed annually; shouldn’t we be absolutely sure that this organ is truly non-essential?

According to acupuncturist Neil Gumenick, the gallbladder is “The Official of Decision Making and Judgment. In any given day, this Official makes countless decisions – conscious and unconscious which influence every aspect of our being…. In health, this Official brings a sense of purpose, order, self-assertion, confidence, hope and optimism to our lives.” Traditional Chinese Medicine assigns prime importance to this small organ. The gallbladder meridian exists with or without the presence of the organ.

Bile is composed primarily of bile salts. Lesser components include cholesterol, phospholipids (particularly phosphatidylcholine), minerals, bilirubin from the breakdown of hemoglobin in the blood, and even some estrogens and assorted debris from the liver. Bile salts are produced by the liver when cholesterol is broken down and are similar in structure to the sex and adrenal hormones. Bile salts are so important that 90-95% is reabsorbed from the large intestine and returned to the liver to be used again for as many as 20 cycles. Studies have demonstrated that bile has a role in liver regeneration. Some drugs which have been developed to reduce cholesterol levels in the body by binding bile salts can create bile salt deficiencies leading to an inability to repair liver damage. An excess of fiber in the diet can also bind bile salts.

What Does Bile Do?

Bile is released slowly from the liver into the small intestine and into the gallbladder for storage. Bile fluid may be quite thin or may thicken upon storage in the gallbladder. The main function of bile is thought to be two-fold. First, bile mixes with fats creating an emulsion of very small droplets which enhances the absorption of fat into the body. Secondly, bile assists in the breakdown of bilirubin (formed from the breakdown of red blood cells) and cholesterol. Interestingly, bile salts, which are formed from cholesterol and bilirubin, also help with the excretion of cholesterol and bilirubin. Fats are important in our diet and fat-soluble vitamins such as A, D, E, and K are essential. If the amount of bile in the body is inadequate, undigested fats are excreted in the stool. When this happens, fat-soluble vitamins are also lost. Undigested fats in the stool can be identified when the stool becomes sticky and adheres to the toilet bowl.

When food containing fat enters the digestive tract, it stimulates the release of a substance that causes the gallbladder to contract and release its contents. A study using various foods such as coffee, tea, milk and yogurt, curcumin, and fat demonstrated that eating fats stimulated the highest volume of bile release. The mineral magnesium, acting under similar hormone control as fatty food intake, also stimulates gallbladder emptying. Magnesium can also assist by relaxing the gallbladder sphincter.

A gallbladder attack is extremely painful with abdominal pain usually on the right side and referred pain to the right shoulder. Attacks usually occur after eating. Dr. James Breneman published the elements of a “gallbladder diet” in 1968. He maintained that attacks were actually the result of food sensitivities. He found in his study that the top food offenders were eggs, pork, onions, chicken and turkey, milk, coffee, and oranges. Using an elimination diet, the unique sensitivities of each person could be identified and then eliminated. About 20% of the participants were actually sensitive to prescription drugs they were using. All in the study successfully ended their recurrent attacks. Unfortunately, as gallbladder surgeries have become more commonplace, modern medicine tends to offer removal of the gallbladder as an expedient solution to attacks rather than focusing on sensitivities and diet.

Gall stones may form when the bile fluid becomes thickened and sludgy. Cholesterol or bilirubin can remain in the gallbladder and form hard particles called stones. Often these stones don’t seem to cause a problem unless a bile duct or the gallbladder sphincter becomes blocked. Surgery is often performed if a blockage occurs. Using supplemental bile salts may resolve gall stones if used for a longer period of time.

How Are Hormones Involved?

A large prospective French study revealed that the use of unopposed oral estrogens, both conjugated equine estrogens (Premarin) and estradiol, was associated with an increased number of cholecystectomies (gallbladder removals). This association was not seen when estradiol was applied to the skin. Excess estrogen activity tends to increase cholesterol levels in bile and thicken the bile liquid, a condition thought to lead to the formation of gall stones. Gallbladder disease is listed as a side effect of estrogen therapies including birth control pills which also create an environment of estrogen dominance. Copper excess often occurs with estrogen excess and copper IUDs may be an additional source of gallbladder problems.

Bile salts have been shown to improve the conversion of inactive thyroid to active thyroid in brown fat cells improving the metabolic rate. There is a strong association between gall stone formation and hypothyroidism. Low thyroid activity leads to a reduction in bile flow, an increased concentration of cholesterol in the bile fluid, and less bile secretion. Thickened bile can also cause insufficient absorption of nutrients needed for the conversion of inactive thyroid to active thyroid. Individuals with sluggish gallbladders may not see improvement with natural thyroid supplements due to the inhibited absorption of these needed nutrients.

In addition to maintaining optimal hormone balance, there are other non-surgical options to consider. According to Dr. David Williams, beets have abundant amounts of betaine which stimulates gallbladder function and has a protective effect on both the liver and bile ducts. Gallbladder pain can sometimes be relieved with a glass of beet juice. Lemon and ginger have also been used to treat pain and nausea. Steer clear of food items which will aggravate the gallbladder. These include trans-fats, refined carbohydrates, excessive caffeine and alcohol, and aspartame (artificial sweetener).

Surgery does not necessarily mean the end of gallbladder woes. Surgeries have produced another condition called “postcholecystectomy syndrome.” Old symptoms may persist and new ones may appear. Complaints of abdominal pain, diarrhea, gastritis, IBS, pancreatitis, and liver disease occur in 10-20% of those who have had their gallbladder removed. Fasting levels of bile acids may increase with the loss of bile storage in the gallbladder which may cause gastritis in 30-50% of people after surgery.

What if you are reading this and have already had your gallbladder removed? Your liver is still producing bile and dribbling it into the small intestine. However, the wonderful reserve of bile that had been stored in the gallbladder is no longer available to respond to the intake of fatty foods. Fats may be difficult to digest or may not be digested at all. Fat-soluble nutrients may not be absorbed as well. The gallbladder is all about digestion. Although it has been deemed non-essential since life doesn’t end with its removal, consequences may emerge as years go by with less than optimal nutrition. Some practitioners recommend that bile salts be used as a supplement with each meal containing fatty foods to try to recapture some of the benefits a bolus of bile from the gallbladder may have provided.

We don’t have gallbladder appreciation days or months or walkathons to curb the number of gallbladders lost every year; however, we can stop for a moment to reflect how it quietly completes its work; to consider the exquisite coordination that takes place with signals from fatty foods directing the gallbladder to release just the right amount of bile; to marvel at the balance achieved between fat absorption and cholesterol elimination. Who can maintain that the gallbladder is a non-essential organ?