Adrenal glands prepare the body for action when presented with a “fight or flight” situation. If we do not allow time for recovery, the adrenal glands may become overworked. Exhausted adrenal glands may result in an adrenal hormone deficiency known as hypoadrenalism, which may lead to chronic fatigue and a variety of other symptoms, weakening our ability to deal with life’s daily stresses. 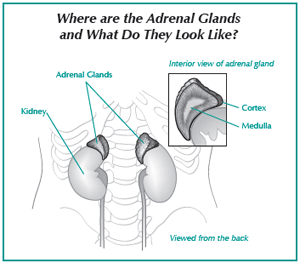 In addition to helping deal with stress, the adrenal glands are essential for the body’s ability to adapt to environmental changes, such as temperature fluctuations, food and water, and the amount of rest we get. The adrenal glands are located at the upper end of each kidney and are composed of two parts known as the medulla and the cortex.

As the inner portion of the adrenal gland, the medulla produces epinephrine (adrenaline) and norepinephrine. These hormones are triggered in response to acute stresses such as fear and anger. They are responsible for increasing heart rate and blood pressure and mobilizing sugar from the liver into the bloodstream.

The cortex is the adrenal glands’ outer surrounding layer and produces over 40 different hormones called corticosteroids, which are essential for responding to more prolonged stresses, such as:

Hydrocortisone (also known as cortisol) is thought to be the most important corticosteroid. Cortisone is produced by the adrenal gland in smaller quantities and is converted to hydrocortisone by the body.

One of hydrocortisone’s functions is to stimulate the conversion of protein to glucose, which is vital to maintaining appropriate levels of blood glucose for brain function and use of the muscles and tissue, especially between eating. Other steroids produced by the cortex affect muscle and tissue growth and development and regulate our fluid and electrolyte balance. The adrenal glands also produce small amounts of estrogen, testosterone, and progesterone.

As part of the endocrine system, the adrenal glands work in conjunction with the thyroid, pituitary, and hypothalamus glands. Malfunction in any of these glands sends a ripple effect through other endocrine glands and eventually the whole body, making it difficult to identify the true source of the problem.

Dr. Robert Atkins’ Health Revelations newsletter suggests trying the following simple test to determine if your adrenal glands are functioning properly. You can do this at home, but you will need a blood pressure gauge:

Hypoadrenalism was first described by Sir Thomas Addison in 1855. The reverse condition, an over-productive adrenal gland, is called Cushing’s disease or hyperadrenalism. Of the two, hypoadrenalism is more common.

Some people are born with low adrenal function (sometimes called congenital hypoadrenalism), especially if their mother was hypoadrenal during pregnancy. In others, it may manifest over time as the adrenal gland becomes increasingly inadequate in responding to stress (known as acquired hypoadrenalism). In either case, this condition may stem from a problem with the adrenal gland itself (primary hypoadrenalism), or result from a related dysfunction, such as a problem with the hypothalamus or pituitary gland, or a hormone imbalance (secondary hypoadrenalism). Secondary acquired hypoadrenalism, which typically involves a malfunction of one or more of the pituitary/thyroid/adrenal aspects of the endocrine system, seems to be the most common form.

The symptoms of hypoadrenalism can range from extreme to mild conditions. It is not typically an “all or nothing” disease, resulting instead in a sometimes perplexing variety of symptoms that are similar (and perhaps related) to those of several other conditions, including hypoglycemia and hypothyroidism. People with adrenal insufficiencies tend to have a low basal metabolism, similar to people with hypothyroidism.

While it may seem more prevalent today, hypoadrenalism is not necessarily the result of our modern lifestyles. In the 1920s, Dr. Louis Berman reported on the symptoms associated with “a general disturbance of the body and mind,” which is now thought to be hypoadrenalism. Dr. Berman noted that many people with an adrenal insufficiency report being overexcited when they should rest and sleep, and tired and weak when they need to function.

The primary symptom of hypoadrenalism is excessive fatigue (some people may think they have chronic fatigue syndrome). This fatigue is often accompanied by a variety of other symptoms, including:

As mentioned earlier, the adrenal glands also produce some estrogen, progesterone, and a little testosterone. In his book, Safe Uses of Cortisol, Dr. William McK. Jefferies writes: “Adrenal estrogen seems to be mainly involved in providing a supply of this hormone during menses and at the menopause when production by the ovaries is temporarily or permanently interrupted, but it may have other, as yet unrecognized functions in growth or development.” Thus women with hypoadrenalism may experience symptoms different from men with hypoadrenalism:

Many symptoms may surface during or after a physical, mental, or emotional stress when adrenal reserves are especially low. For example, Dr. Jefferies discusses “jet lag” as perhaps being related to a temporary adrenal insufficiency. He explains that a person who normally sleeps from 11 PM to 7 AM typically experiences their highest level of hydrocortisone around 8 AM; this peak gradually decreases throughout the day and into the night, reaching its lowest level around 1 AM.

This cycle seems to be related to a person’s sleep pattern. When sleep patterns are disrupted, such as when traveling, it takes approximately 5 to 10 days to get the hydrocortisone levels back on track. Similar effects are also observed in people who work on rotating shifts or suffer from sleep deprivation for various reasons.

Dr. Jefferies suggests that “In many cases adrenal insufficiency seems to result from a type of autoimmune phenomenon.” People often describe “flu-like” symptoms:

During influenza, hydrocortisone levels are diminished due to the body’s attempts to fight off the virus. Dr. Jefferies and others have observed that this type of hypoadrenalism seems to be related to an impaired hypothalamic or pituitary response rather than stemming directly from the adrenal gland.

Allergic disorders, which are also related to our immune response, can also be associated with hypoadrenalism. Evidence suggests that a deficiency of hydrocortisone may contribute to an excess of histamine. This may lead to a runny nose, allergic asthma, and itching.

There may be a connection between rheumatoid arthritis (RA) and hypoadrenalism. Many RA patients respond favorably to cortisone-based treatments. However, there is some speculation that arthritis may result from an underlying malfunction of steroid metabolism, also possibly related to autoimmune factors.

Hypoadrenalism symptoms are often the result of a hydrocortisone deficiency. Appropriate natural hydrocortisone replacement therapy typically alleviates or eliminates most symptoms of adrenal insufficiency. Many patients report feeling better within 24 hours of treatment.

In the past, there has been some misperception about the benefits of cortisone and hydrocortisone treatments. This confusion primarily stemmed from the fact that the earliest treatments relied on doses that were much higher than those normally produced in the body, resulting in some undesirable and potentially hazardous side effects. Many healthcare practitioners assumed that any dosage potentially produces the same results. Additionally, many people confused cortisone and hydrocortisone with their more potent derivatives (such as prednisone and dexamethasone), which may produce undesirable side effects with prolonged use. As a result, a common assumption is that all “cortisone therapy” may be harmful.

However, after years of successfully treating patients with smaller doses that more closely resemble those that the body naturally produces, Dr. Jefferies and others have promoted the use of hydrocortisone as a safe and effective treatment for hypoadrenalism. Typical treatment options include medications such as cortisone acetate or hydrocortisone. Hydrocortisone may be compounded to address each patient’s individual needs.

Evidence suggests that prolonged use of low dosages (i.e., within or lower than the replacement level) of cortisone acetate or hydrocortisone does not impair adrenal response. Dr. Atkins reported on hydrocortisone research, emphasizing the importance of maintaining healthy hydrocortisone levels to minimize the effects of stress and aging. In addition to working with a healthcare practitioner to determine if adrenal glands are functioning properly, patients may take the following actions to control stress and bring adrenal hormone levels into balance:

Our bodies and minds are constantly bombarded with stressful situations that trigger adrenal activity. While chronic fatigue and other symptoms may be related to exhausted adrenal glands due to stress, these symptoms might indicate other underlying hormonal imbalances or other health conditions that are not necessarily stress-related. Before jumping to conclusions, it’s important to make sure that your body’s mechanisms for dealing with stress are functioning properly.