The Liver’s Role in Hormone Balance

Everything we breathe, ingest, or absorb through the skin gets into the bloodstream and eventually passes through the liver. Because the liver is the body’s primary detoxifier, keeping it healthy is critical to your overall health, including proper metabolism and function of your hormones.

As unglamorous as it sounds, the liver operates somewhat like a sewage treatment plant. The liver takes everything we put into our bodies—whether it is swallowed, inhaled, or absorbed through the skin—and filters it. The liver’s filtration process separates the nutrients that the body needs for energy and all of its other functions and prepares to dispose of that which the body does not need, such as metabolic waste, toxins, and excess substances. Specific liver functions include: 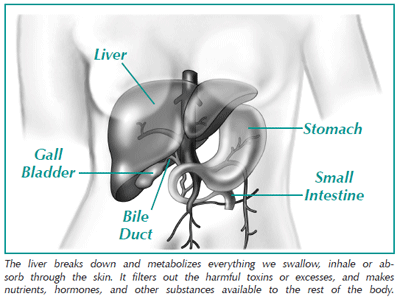 Health problems can arise when we put things into our body, both consciously and unconsciously, that are toxic or build up an excess or toxicity over time, such as:

Health problems can also occur if the nutrients that the liver needs to process toxins or excesses are in limited supply. Like a sewage treatment plant that is short-staffed, if these nutrients are in short supply, the liver cannot process as quickly or as thoroughly as needed. If the liver becomes overburdened because of insufficient nutrients, the toxins or waste build-up and the excess can escape back into the body, leading to serious health concerns.

The liver plays a vital role in the body’s use of hormones, both those that are produced naturally in our bodies as well as those hormones that are “introduced” via hormone therapies. It acts as a hormone processor, manufacturing and/or regulating some hormone levels and directing various hormones to perform their proper function in other parts of the body. But when the body experiences a hormone excess (whether produced by the body or introduced by hormone therapy), the liver may not be able to process the hormone(s) as quickly or efficiently, causing a hormone imbalance.

Of primary concern for women’s health is the liver’s role in regulating the sex hormones, primarily the estrogen hormones. This is a consideration for women undergoing hormone therapy, whether it is conventional hormone replacement therapy (HRT), typically consisting of synthetic hormones that are not biologically identical to human hormones, or biologically-identical hormone therapy (BHT).

Researchers are gaining new insight into how estrogens are metabolized and the effects of that metabolism. They found that estrogens break down into estrogen metabolites that have varying levels of estrogenic activity, and that the stronger the estrogenic effect, the greater the risk of developing estrogen-related cancer.

Phase I and Phase II Pathways

The liver metabolizes hormones and other substances using two primary phases known as the Phase I and Phase II pathways. During Phase I, some hormones or substances are metabolized directly, but often they are converted into intermediate forms, which are then further metabolized in Phase II. Cumulatively, these two phases of biological transformation are how the liver provides the body with nutrients and supports the excretion of excess or toxic substances in the urine, liver bile, perspiration, and exhaled air.

The pathways depend on a large number of nutrients, including enzymes and amino acids, and their availability (or lack thereof) seems to have a significant influence on the metabolic outcome. For example, the Phase I pathway is the main metabolic pathway for the estrogen hormones. In premenopausal women, the ovaries produce estrogen, primarily estradiol, most of which the body converts to estrone, and eventually estriol. The liver then metabolizes the remaining estradiol and the converted estrone, breaking it down further, and excreting the excess from the body.

Some researchers and practitioners now believe that the liver’s ability to metabolize estrone is the key to understanding estrogen-related cancer risk. During Phase I metabolism, estrone is converted into various metabolites including 2-hydroxyestrone, a very weak estrogen, and 16-alphahydroxyestrone, a very potent estrogen. If the conversion process favors the stronger form(s) rather than the weaker form(s), then tissue that has an abundance of estrogen receptors, such as the breasts and uterus, may be more vulnerable to excessive estrogen activity, potentially leading to the formation of fibroids or the stimulation of estrogen-sensitive cancers.

Many factors may affect Phase I processing, including extreme overload, the effects of alcohol or drugs, a lack of nutrients, or interference from other substances. For example, grapefruit juice may slow down the enzymes in Phase I, potentially altering hormone balance. Additionally, many prescription drugs are metabolized in Phase I, which may also interfere with the liver’s ability to handle estrogen hormones. On the other hand, Indole-3-carbinol (I3C), a phytonutrient derived from cruciferous vegetables (e.g., broccoli, cauliflower, cabbage, and Brussels sprouts), stimulates enzymes that promote the metabolism of estrogens into milder forms, potentially reducing the risk of estrogen-dependent cancers.

Each reaction in the Phase I pathway produces an intermediate form called a free radical. Free radicals can be very damaging to body tissues if they are not quickly neutralized by antioxidants. Nutrients such as vitamins C and E, minerals such as selenium, and other substances such as lipoic acid and glutathione are antioxidants that help protect against free radicals. The intermediate forms produced in Phase I are in a highly reactive state until they are fully converted during Phase II.

During Phase II, a process known as conjugation begins, in which nutrients such as amino acids are combined with hormones and other substances, to convert them to water-soluble compounds that can be excreted efficiently in the urine or stool.

Of the various types of conjugation that may occur in Phase II, the following are most relevant to hormone metabolism:

Glutathione deserves special mention as a crucial detoxifier because it also behaves as an antioxidant in Phase I. It neutralizes the free radicals produced in the Phase I reactions, and combines with them to produce water-soluble compounds that can be excreted.

Glutathione is also needed for the detoxification of alcohol. Studies have shown that even a small amount of alcohol intake can increase estrogen levels in the blood because alcohol competes for the available glutathione, preventing estrogen excretion. Smoking is also known to deplete glutathione levels, as do chronically stressful conditions such as infections or inflammatory disorders.

Bile is a complex fluid secreted by the liver for the digestion and absorption of fats and fat-soluble substances. Bile is stored in the gall bladder, where it then flows through the bile duct to the small intestine, from which it is eventually eliminated in the stool.

Many fat-soluble toxins, including excess estrogen hormones, are eliminated from the body into the intestines with the aid of bile. However, some women, such as those on birth control pills, may have difficulty eliminating excess estrogens, and this may be linked to an inhibited bile flow. Methionine, found in an over-the-counter dietary supplement called SAMe, has been shown to improve bile flow, thereby helping to reduce excess estrogen levels.

To regulate sex hormones, the liver also produces special proteins (binding globulins) that “chaperone” the hormone molecules throughout the body. If the hormone level is too high, the protein also inactivates the body’s own hormone production as part of its chaperoning duty.

Sex hormone-binding globulin (SHBG) is stimulated by estrogen in the bloodstream. However, as the body produces more SHBG, it is more attracted to testosterone than it is to estrogens. In the case of women who have been treated only with estrogens after a hysterectomy, it is therefore predictable that testosterone activity is limited due to the increase in SHBG stimulated by this overbalance of estrogen. A consequence of this is a decrease in sexual interest, mental zest, and the body’s ability to maintain muscle mass.

As mentioned earlier, most drugs are metabolized during Phase I. However, the delivery method is key. Orally administered drugs, including birth control pills and other hormones, are absorbed through the digestive tract and at least partially metabolized by the liver and excreted before they can be made available to the rest of the body. This is known as the “first-pass effect.” Avoiding the first-pass effect is not intended to protect the liver, but to provide greater absorption of the hormones.

Delivery methods that avoid the first-pass effect include creams or gels applied to the skin, suppositories or inserts administered in the rectum or vagina, and lozenges or drops delivered under the tongue in the mouth (not swallowed).

In addition, oral gelatin capsules that contain micronized powdered hormones mixed with edible oils also avoid the first-pass effect because the fat is taken up directly into the lymphatic system. To illustrate the difference that the delivery mechanism can make, refer back to the role of SHBG in hormone balance and consider this: a study showed that orally administered conjugated estrogens (not in edible oil) transfer to the liver quickly, triggering the liver to release SHBG, whereas a skin patch containing estradiol did not trigger the SHBG release, primarily because the patch released the hormone more slowly. From that study, we may infer that the influx of estrogen and resulting SHBG spike from conjugated estrogens (not in an edible oil) can have a negative effect on other hormones, whereas estradiol absorbed through a skin patch would not have that same effect.

The liver is responsible for literally hundreds of functions that affect the entire body, including regulating hormones. Maintaining a healthy liver is central to maintaining hormone balance, which in turn helps to maintain overall health.

One of the best ways to achieve and maintain good overall health is to be kind to your liver. This includes reducing the burden on the liver whenever possible and providing adequate supplies of nutrients to assist with detoxification.

Liver stress can be reduced by avoiding overeating and heavy alcohol use. Other ways to reduce liver burden are to eliminate processed foods, high-fat foods, and those with preservatives or other additives from your diet, and to drink plenty of water to facilitate the elimination of toxic and excess substances. Reducing exposure to toxic chemicals such as pesticides and herbicides in your home, yard, and workplace will also reduce the burden on the liver and promote liver health.

As discussed previously, the liver is dependent upon many nutrients to complete its job of breaking down and detoxifying any excess and toxins. To promote healthy liver function, we must ensure that those nutrients are available with a proper diet and/or supplementation, when necessary or appropriate.

If you are wondering if your liver function is up to par, ask yourself the following questions:

If you answered yes to any of these questions, discuss your liver health with your healthcare practitioner. We are fortunate in that the liver is quick to heal itself if we give it the chance to do so.