A Perspective on Male Hormones

The Yin-Yang of Testosterone and Estrogen

Everyone knows that testosterone is the essence of maleness. It is what makes men feel better, look better, and perform better— both physically and sexually. But many people may be surprised to learn that estrogen also plays a key role in men’s sexuality, and is essential to their cardiovascular and circulatory health, as well as their muscle mass and bone strength. 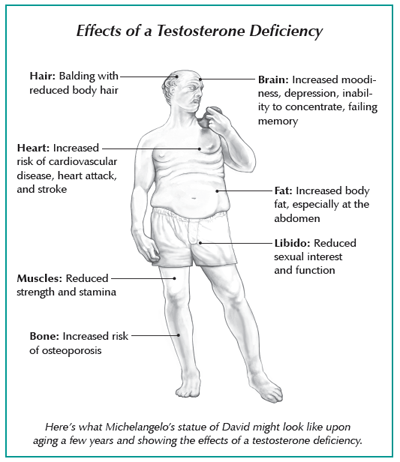 What Does Testosterone Do?

Before we go any further with how estrogen and testosterone complement each other, let’s review the various functions of testosterone in men’s health. Testosterone’s effects can be grouped into two categories: androgenic and anabolic.

Androgenic refers to the masculinizing or virilizing effects, including the growth of facial and body hair, sex organ development, deepening of the voice, and male pattern baldness. The anabolic effects are those that stimulate the growth of muscle, bone, and red blood cells.

During fetal development, testosterone and its metabolite, dihydrotestosterone (DHT), are necessary for the formation of the internal and external male genitalia. During puberty, testosterone triggers voice changes, the growth of facial and body hair, stimulates sexual behavior, and initiates sperm production. In adult males, testosterone is necessary to maintain muscle mass and strength, bone mass, normal hair growth, libido, and sperm production.

What Is the “Normal” Testosterone Range in Men?

The “normal” range of testosterone levels is quite broad, which is one of the reasons why an excess or deficiency is difficult to detect. The average adult male has somewhere between 260 and 1,000 nanograms (ng) of testosterone per deciliter (dl) of blood plasma. For comparison, the range for women is approximately 50 to 70 ng/dl.

While some reference ranges consider male testosterone levels as low as 193 ng/dl to be considered adequate, Life Extension recommends a “moderately youthful” range of between 700 and 900 ng/dl.

Determining what is “normal” is a critical aspect of hormone therapy so that a deficiency or excess can be treated appropri­ately. Unfortunately, a baseline representing the normal healthy state is rarely available, and the average age-related decline in male testoster­one is so slow that it can be difficult to recognize an imbalance. The manifestations of such an imbalance typically depend on the person’s age, as well as the severity and duration of the imbalance.

The reality of male menopause or “andropause” is gradually gaining recognition. Men do experience hormonal changes as they age, and they usually begin to notice these changes around age 40. However, just as women can begin menopause at an earlier age, men can begin to experience changes soon­er than that as well.

Between the ages of 25 and 50, a man’s testosterone level decreases by approximately 50%, while his estrogen levels, specifically estradiol, increase by 50%. The yin-yang balance still exists, but its shift results in a variety of symptoms.

Symptoms of Testosterone Deficiency in Men

A testosterone deficiency can be associated with a number of potentially confusing symptoms, which may lead to misdiagnosis or simply remain unexplained. Dr. Thierry Hertoghe believes that a hormone deficiency should be considered when searching for the cause of any chronic or recurrent condition.

Because testosterone affects so many different body systems, the symptoms of testosterone deficiency may span a wide range, including changes in physical characteristics, cardiovascular and circulatory problems, mental and emotional troubles, and sexual dysfunction. In addition, the age-related decline of testosterone can be accelerated by many factors, including:

These factors can be both a cause and an effect of a testosterone deficiency.

Adult males often go through physical changes as they grow older, and many of the changes can be attributed to the age-related decline in their testosterone level (see Effects of a Testosterone Deficiency). These changes might include reduced body hair and a balding head, as well as decreased muscle mass with an increase in body fat, which affects their strength and physical abilities. They also often feel a decline in their overall energy and stamina. While these types of changes may be considered part of the “normal” aging process, they can also be accelerated by a testosterone deficiency and, therefore, slowed with hormone therapy.

Because testosterone is a muscle-building hormone and the heart is a muscle with many receptor sites, low testosterone levels can lead to cardiovascular disease. According to the November 1999 issue of Life Extension magazine, “Testosterone is not only responsible for maintaining heart muscle protein synthesis, but it is a promoter of coronary dilation and helps to maintain healthy cholesterol levels.” As a result, a deficiency can lead to:

The mental and emotional problems associated with a testosterone deficiency are the easiest to overlook (especially since men may be reluctant to discuss these sorts of issues), but they can be equally devastating. Life Extension reports the following potential mental problems in response to low tes­tosterone levels:

These symptoms, which are also often associated with depression, can usually be alleviated with testosterone therapy. Testosterone treatments have proven their value as a potential treatment of depression in men.

There is no doubt that testosterone is the key to male sexuality. In his book, The Testosterone Syndrome, Dr. Eugene Shippen explains that the pelvic/genital region is packed with testosterone receptors. He states, “In fact, all the different structural components of the genital area—nerves, arteries, veins, muscles—are guided in their formation by testosterone and maintained in good, working order, throughout life, by that very same hormone.”

However, sexuality is far more complex than that; it is complicated by several interrelated factors, including the fact that testosterone also affects the brain, influencing sexual interest, attraction, and arousal. In Super “T”, Dr. Karlis Ullis explains the effects that hormones can have on the following eight separate aspects of human sexuality:

A sex hormone imbalance may affect multiple aspects of sexuality, with a domino-like effect. In men, one of the first signs of a testosterone deficiency is a diminished libido, which can lead to problems with sexual function and fulfillment, which then further compounds the problem because these are often tied to a man’s sense of overall well-being and self-worth. In this way, sexual problems can contribute to mental or emotional problems (such as damaged self-esteem, moodiness, and depression), which can further compound the sexual problems, and without treatment, the cycle continues.

How Does Estrogen Affect Testosterone?

The effects of testosterone are further complicated by its relationship to another sex hormone: estrogen, especially estradiol. As discussed earlier, the yin-yang balance between the estrogen hormones and testosterone is key for both men and women; together, they define our sexuality. Fortunately, the human body is amazingly adept at converting what it has to what it needs.

In men, an abundant supply of testosterone combines with a plentiful enzyme called aromatase to produce estrogen when and where it is needed. Dr. Shippen believes that “men’s bodies would not have a process for making estrogen if it were useless to them.” He identifies many estrogen-sensitive areas of the male body, including the brain, and explains that estrogen is a critical aspect of the brain chemistry that triggers natural sexual functions, stating: “Too little estrogen will neuter a man just as effectively as too little testosterone.”

However, for most adult men, the problem is not too little estrogen, but too much! A primary cause of hormone imbalance in men as they age is that testosterone is increasingly converted to estrogen, resulting in an excess of estradiol. Life Extension recommends that men maintain estradiol levels between 21.8 and 30.1 pg/ml.

Similar to how women react to minute amounts of testosterone, men have a very small window of optimum effectiveness when it comes to estrogen. Because the estrogen derived from aromatase actually displaces testosterone at the receptor sites, it has the effect of “turning off” testosterone-driven activities or regulating the force of those actions. In this way, estrogen and testosterone exist in a delicate yin-yang balance.

Estrogen is necessary to complete the whole, but it also keeps testosterone in check. While men need estrogen to make sexuality possible, it is also the complementary off switch. Unfortunately, that switch can get stuck in the off position. As Dr. Shippen puts it, “Like so many things that work well when we are young, the control mechanism aspect of estrogen can get out of hand as we grow older. Illness, drugs, dietary imbalances, lifestyle, and certain aspects of normal aging help accelerate this process and raise estrogen levels to unhealthy heights.”

According to Dr. Shippen, common causes of elevated estrogen levels in men are:

Since these problems are often interrelated, many men often have more than one estrogen-enhancing influence. At the same time, their body’s built-in methods for eliminating estrogen also falter, which further contributes to the excess.

Another side-effect of elevated estrogen in men is that it tricks the brain into thinking that the supply of testosterone is adequate, which slows down the natural production of testosterone. In addition to the problems associated with low testosterone that have already been mentioned, this combination of low testosterone and high estrogen is particularly dangerous because it can increase the risk of heart attack or stroke in men and adversely affect the prostate gland. Fortunately, this imbalance can be successfully treated with hormone therapy.

What Are the Treatment Options?

The method of testosterone therapy is a critical aspect of the success of the treatment. According to Dr. Stephen J. Winters in a report entitled Current Status of Testosterone Therapy in Men, “the delivery of testosterone … in a way that approximates normal patterns and levels poses a therapeutic challenge.”

Therefore, it is important to work closely with a healthcare practitioner to monitor the appropriate method and dosage when undergoing testosterone therapy. Current delivery methods include gels, creams, patches, injections, pellets implanted under the skin, and now an underarm roll-on solution.

Some men have also successfully treated sexual problems with Kegel exercises and herbal remedies such as:

Because herbs can interfere or interact with other medications, be sure to consult your healthcare practitioner or pharmacist before using them.

Is Too Much Testosterone Possible?

In addition to a high level of estrogen, symptoms of too much testosterone can include an over-stimulated libido, acne, excessive development of the male breasts, weight gain, edema, sleep apnea, urinary obstruction, and a high red blood cell count, among others. However, Dr. Hertoghe cautions that an excess of any hormone often indicates a deficiency of other hormones, so a thorough hormone test is probably wise before assuming that the problem is entirely related to testosterone levels.

The most important thing to remember is that the benefits of testosterone therapy far outweigh the potential drawbacks, especially when there is appropriate delivery, dosage, and monitoring. In fact, a landmark study using HIV-positive men demonstrated that testosterone therapy was safe and effective, even for such extreme cases with numerous additional medical complications.

Copyright © Women’s International Pharmacy. Reviewed and Edited 2018. This newsletter may be printed and photocopied for educational purposes, provided that your copy (or copies) include full copyright and contact information.