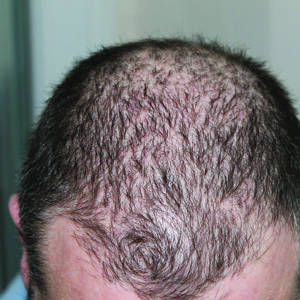 Society places a lot of importance on hair. For men, it’s as if the ability to grow hair is intimately tied to his abilities, success, and manliness. The FDA has approved two drugs for male hair loss. The first is Rogaine (minoxidil), which appears to work by increasing circulation to the scalp, and can be used by men and women. It is available without a prescription.

The second is Propecia (finasteride), which, at a 1 mg dose, is a smaller dose of a drug called Proscar, which is used to treat an enlarged prostate at 5 mg doses. This drug is only approved for men; it is not approved or recommended for women, and doesn’t appear to work on women.

As potential users comb the internet, it appears that Propecia is a safe option and that hair regrowth is satisfactory. However, things may not be as rosy as the official FDA approved language states. It was an eye-opener to find the site propeciahelp.com and learn another part of the story.

Finasteride is absorbed into the brain and has a negative effect on the production of the brain neurosteroids, including DHT and allopregnenolone (from progesterone). Not only does this enzyme affect DHT, but it also affects the conversions of progesterone, cortisol and aldosterone in the brain. In addition, German researchers found that use of the drug prevents the regrowth of neurons in the hippocampus. Emotional flatness, depression, anxiety, decreased concentration and memory loss–all of which continue on after the drug has been stopped–have been documented. Suicidal thoughts, and even suicide, have also been reported.

Physical side effects include curvature of the penis, testicular and scrotal pain, atrophy of the penis and testicles, breast enlargement, inability to achieve erections, and loss of the ability to reach orgasm. Because testosterone becomes deficient, cardiac, and muscular problems may also emerge. A very aggressive form of prostate cancer can occur after using Propecia.

Class action law suits have been initiated against Propecia in Israel and Canada. Not only are there significant side effects involving sexual function, a significant number of young men continue to have these effects even years after stopping the drug. Sexual therapy, testosterone, and Viagra do not work to resolve their issues, and their progesterone levels tend to continue to be low. Some investigators believe that permanent damage has been done and that the problems resulting from finasteride use are not reversible.

An explanation for the damage perhaps lies with finasteride’s chemical structure. Finasteride might be classified as a synthetic progestin and/or testosterone when you examine the features common in all three molecules. As we already know from many studies and observations, progestins never substitute for the action of progesterone. The Women’s Health Initiative study demonstrated this issue quite well.

A solution has not yet been determined. It may take careful restoration of many hormones to help resolve the symptoms and restore proper function. It is a great concern that older men who seek relief from enlarged prostate glands may be suffering greatly from these symptoms when they use Proscar, only to have their concerns dismissed as part of the aging process.

Should we consider that male pattern baldness is a natural process that should be left alone? Is this long-held theory regarding DHT really the truth of the matter? Some investigators are looking into the hydroxysteroid dehydrogenase (HSD) family of enzymes as the culprit. Apparently it is a medical mystery still waiting to be solved.