Your body produces more than sixty different hormones and, without them, you couldn’t live. Hormones are chemical messengers that circulate in your bloodstream and orchestrate the continuous activity in the cells and organs in your body.

From the regulation of your heartbeat and breathing, to the control of your blood pressure and metabolism, hormones are involved. They also help fight stress, soothe pain, calm anxiety, and stimulate your immune system.

Sex hormones such as estrogens, progesterone, and testos­terone play important roles in controlling sex drive, regulating the menstrual cycle, and allowing for pregnancy and birth. Sex hormones are also potent “neurosteroids” that help maintain the central and nervous system tissue.

Proper hormone balance is critical to your health, and hormones are the most delicately balanced system in your body. Given the number of hormones that make up this system, and the continual communication between hormones that is necessary to maintain a healthy balance, the literature on hormones is vast. Unfortunately, much of the information available today is inconsistent, and at times misleading, especially with respect to hormone therapy.

Different types of hormone therapy involving various forms of hormones are now prescribed to offset hormonal imbalances, yet the differences between such therapies are not always clear. The goal of this newsletter is to provide a solid understanding of bioidentical (or biologically identical) hormones, along with their uses and benefits.

What Does “Bioidentical” Mean?

With bioidentical hormone therapies, each individual’s hormone deficiencies or excesses must be evaluated. In determining the optimal hormone therapy for an individual, a practitioner must take into consideration the interactions among the different hormones, as well as other potential effects of each hormone throughout the body. For example, bioidentical progesterone protects the uterus and, at the same time, has positive effects on mood, memory, and sleep.

The Rest of the Story

We are bombarded with information from television, radio, newspapers, magazines, brochures, and the Internet daily. For many people, these have become their primary sources of information about hormone therapies. However, while it may be helpful, the information disseminated may be only part of the story, or sometimes even biased, based on its sources.

The very studies created to test the safety and benefits of hormone therapies are often responsible for creating mis­information. In some cases, study designs have been faulty, and therefore the results misleading and potentially alarming for women taking hormones. The Women’s Health Initiative (WHI) is the landmark example of a highly publicized study that suffered from flawed design, as well as inadequate screening of study participants.

The WHI study was developed to study the long-term effects of non-bioidentical estrogens and progestin hormone therapy in postmenopausal women and specifically assess the risk of heart disease, hip and other factures, and breast cancer. One hormone product used in this study was Premarin®, which some consider “natural estrogens” because it comes from pregnant horse urine. However, Premarin’s effects in the human body are different than the effects of bioidentical estrogens. Another hormone product used in the WHI study, Prempro®, contains Premarin and medroxyprogesterone (a progestin).

Of the approximately 16,000 female participants in this trial, none were screened prior to the study to determine whether or not their own hormone levels were adequate. The Prempro portion of the study was stopped early due to an increased risk of breast cancer, heart disease, stroke, and blood clots. Soon after, the Premarin portion of the study was also stopped. These results, and the media attention they received, left women and their practitioners alarmed and unsure about what to do. They also raised many questions regarding whether women should continue with their therapy, try alternate therapies, or completely stop their therapy.

Furthermore, the publicity implied that these results applied equally to “all” hormones when, in fact, bioidentical hormones were not included in this study. In addition, some professional medical groups with financial ties to the pharmaceutical industry have promulgated the misinformation that all bio- identical and synthetic hor­mones behave in the same fashion, disregarding basic principles of physiology.

Fortunately, research is starting to include compounded bioidentical hormone preparations. In fact, a November 2011 article in BMC Women’s Health reports on a 7-year long cohort study of 296 women using various bio­identical estrogen, progesterone and DHEA treatment strategies. The results confirmed marked improvements in emotional stability, irritability and anxiety, and some improvement in night sweats and hot flashes within 3 to 6 months.

Common terms used when referring to bioidentical hormones include:

Many different acronyms are now being used for hormone therapies, including HRT, BHT, BHRT, and NHRT to name a few. HRT is the general acronym for Hormone Replacement Therapy, while BHT stands for Bioidentical Hormone Therapy. BHRT is the same as BHT with the word “replacement” added. NHRT, which stands for Natural Hormone Replacement Therapy, can be a confusing term because “natural” is also often used when describing herbal remedies, as well as BHT.

Bioidentical hormones can be either supplied by a pharmaceutical manufacturer or compounded in a medication by a pharmacist. Bioidentical manufactured hormones have the advantage of being FDA approved; however, they are mass produced and are only available in limited dosing strengths and formulations. On the other hand, compounded bioidentical hormones can be prepared for individualized dosages or strengths, and in a number of different formulations.

The Many Uses of Compounded Prescriptions

Compounded prescriptions are essential to the well-being of many individuals; thus, they are used in many facets of healthcare. For example, compounded medication is commonly prescribed in the fields of pediatrics, geriatrics, internal medicine, obstetrics/gynecology, and endocrinology. The veterinary profession is also greatly aided by compounding, as many more species and sizes of animals can be treated individually (see www.pethealthpharmacy.com for more information). In all of these specialties, practitioners can address specific needs whether they are dosage forms, dosage strengths, flavors, routes of administration, or combinations of medications.

Practitioners have more options in treating their patients when prescribing compounded medications, especially when it comes to the individual needs of premature infants, babies, children, and the elderly. Infants born prematurely and weighing only a few pounds rely on the compounded prescriptions and smaller dosages of many lifesaving and life-sustaining drugs. For geriatric patients, who often are unable to swallow pills and may need different dosage forms in order to take their medications, compounding is critical. A significant percentage of the needs of home healthcare patients are met by compounded medications as well, such as total parenteral nutrition, which is necessary for the post-operative healing of colon disorders.

End-of-life therapy in hospice or through palliative care also often involves compounding different dosage forms to allow patients to spend the rest of their lives free of pain and discomfort. Compounded prescriptions may be vital for patients who can’t swallow medications or don’t have the muscle mass required to endure daily multiple injections. Many cancer-fighting medications and lifesaving intravenous drugs used in hospitals are compounded. Finally, hormone therapies can be prescribed to suit a patient’s individual hormone needs, thanks to compounding.

Dr. David Brownstein, an advocate of compounded prescriptions, points out in a special report in Integrative Medicine that patients need individualized doses of hormones. “Pharmaceutical companies want us to believe that everybody needs the same dose of all medications,” he writes. “In truth, everyone has a unique biochemical thumbprint; we don’t all need the same dose of pharmaceuticals, vitamins, or even the same amounts of nutrients in foods.”

For optimal hormone treatment, a practitioner can fine-tune or modify the dose or prescription of a compounded BHT as an individual’s hormonal needs change, or match an individual’s preferences and absorption abilities.

Another advantage to compounded BHT is that multiple hormones can be combined in a single dosage form to ensure better patient compliance.

A Bit of History

Until the 20th century, pharmacy was all compounding and involved the use of water and alcohol for the extraction of substances from plants, animals, and minerals. Going back to the time of Hippocrates (4th century BC), the preparation of pills, ointments, oils, and inhalations was commonplace.

Over the next two thousand years, pharmacists continued to apply the art and science of pharmacy to the preparation of medication, using the highest standards possible at the time.

During the 1980s and 1990s, the number of compounded prescriptions began increasing due to a resurgence of recognition of individual patient needs—something that mass produced drugs are unable to accomplish because many are available only in limited dosage forms and strengths. Today, the demand for prescription compounding makes it a rapidly growing component of pharmacy practice. In a 2005 survey of independent pharmacists in four Midwestern states, 94% of the respondents indicated that they perform compounding services.

Compounding pharmacists formulate combinations that may include approved FDA and/or pharmaceutical-grade ingredients, as determined by a medical practitioner, into specific dosage forms such as capsules, creams, gels, lozenges, tablets, suppositories, and other forms.

In the pharmacy industry, compounding pharmacists are regulated by their state boards of pharmacy. Standards are set by the U.S. Pharmacopeia and National Association of Boards of Pharmacy for quality assurance. The FDA also has jurisdiction over ensuring the quality of the ingredients involved in compounding. 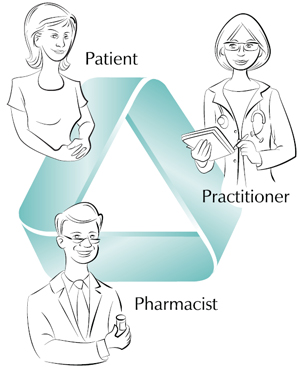 With compounded hormone prescriptions, it is imperative that the communication lines remain open and free-flowing among the three key players shown here: the patient, the licensed practitioner, and the licensed pharmacist. All three individuals play a critical role in obtaining and maintaining the patient’s optimal hormone balance.

The pharmacist provides quality assurance for each and every prescription compounded. The compounding pharmacist is available to the practitioner and the patient to provide information and resources about hormone strengths/dosages, formulations, and effects.

You and your practitioner should discuss the advantages and disadvantages of various hormone therapies, and weigh the risks of therapy against the risks of the potential health issues and discomfort associated with leaving your hormone imbalance untreated.

Awareness, education, and communication are key to optimal hormone balance.

Compounding pharmacists are valuable resources to both practitioners and their patients. Prior to obtaining a compounded bioidentical hormone prescription, be confident that your prescription comes from a highly qualified pharmacy that specializes in compounding. Work with pharmacists who can offer you reliable information about hormone therapies, answer your questions, and provide accurately compounded prescriptions.

The pharmacists at Women’s International Pharmacy understand the uniqueness of each person and go the extra mile, taking the time and effort to meet the specific needs of practitioners and their patients.

This publication is distributed with the understanding that it does not constitute medical advice for individual problems. Although material is intended to be accurate, proper medical advice should be sought from a competent healthcare professional.

Copyright © Women’s International Pharmacy. This newsletter may be printed and photocopied for educational purposes, provided that your copy(s) include full copyright and contact information.