Millions of people world­wide wear sunscreen and avoid the sun to protect against premature skin aging and skin cancer. However, recent studies suggest that staying out of the sun may unwittingly increase our chances of developing bone fractures, diabetes, multiple sclerosis, colon and breast cancers, and other health issues linked to vitamin D deficiency. Why? Because most of the vitamin D our body uses is made in our skin when it is exposed to strong sunshine.

The benefits of sun exposure were recognized as early as the beginning of the 19th century. The Polish physician Jedrzej Sniadecki was one of the first to make this connection when he observed that large numbers of children who lived in the dimly-lit narrow streets of heavily-industrialized areas were suffering from rickets (soft, deformed bones), while their counterparts who lived in rural areas with plenty of sunshine were not.

By the late 1800s, solariums were built in northern Europe and parts of the United States in an effort to treat rickets, osteomalacia (adult rickets), smallpox, tuberculosis, and other diseases. While this “sun connection” was being explored, researchers and physicians found success in treating rickets and other diseases with cod liver oil. Because of the effectiveness of cod liver oil, it was assumed that the active substance was a vitamin.

The commonality between sun exposure and cod liver oil is the component now known as vitamin D, which is not really a vitamin at all, but a hormone. Vitamins are substances that are essential to the function of the human body but are not produced by the body. Hormones, on the other hand, are produced by the body and function as chemical messengers. Further research revealed the chemical structure of vitamin D is similar to that of cholesterol, sex hormones, and adrenal hormones. And, like other hormones, it is actually produced in the human body. 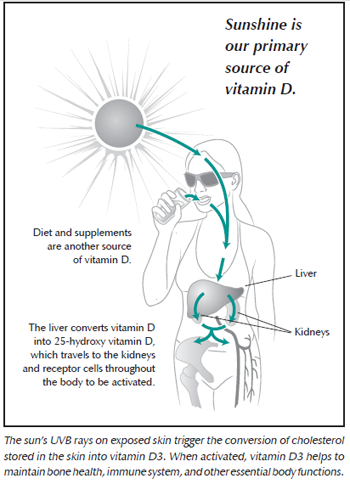 With sun exposure, the skin can supply the amount of vitamin D our body needs. Ultraviolet B (UVB) rays readily convert cholesterol stored in our skin into D3, which is ultimately converted to the active form of vitamin D. When sufficient D3 is produced, the skin stops production, rendering a vitamin D “sun overdose” impossible.

In lieu of sunshine, vitamin D can also be obtained through diet or supplements. Its two primary forms are:

Humans can make use of both forms, and both are commonly found in supplements and fortified foods. However it arrives to the body, inert vitamin D (either D2 or D3) is first converted in the liver, where it is turned into another inactive form called 25-hydroxy vitamin D. This is the “circulating” form that travels either to tissues where it is further converted to the active form in and around the cells for their own use or to the kidneys where it is converted to the active form before dispersing throughout the body via the bloodstream.

The Importance of the Sunshine Hormone

In the past decade, medical researchers have learned that vitamin D plays a much greater role in maintaining our overall health than previously thought. Until recently it was believed that its primary role was to maintain the proper balance of calcium and phosphorus needed to build and maintain healthy bones and that it was activated only by the kidneys. However, research by Michael F. Holick, MD, PhD, revealed that nearly all cells in the body contain vitamin D receptors, which allow them to convert circulating (inactive) D3 into the active hormone. With enough vitamin D in the bloodstream to regulate calcium, the “extra” is reallocated and activated by cells all over the body.

In addition to its role in bone health, vitamin D also regulates dozens of genes and is involved in normal cell division, immune function, insulin secretion, blood clotting, and blood pressure. Its myriad roles throughout the body make maintaining sufficient levels of this hormone crucial to overall health, yet Dr. Holick estimates that 30-50% of Americans are actually vitamin D deficient.

While no one has proven why vitamin D deficiency is on the rise in the developed world, the problem has grown in the last 20 years in tandem with a noted decline in sun exposure. Geography, season, skin color, age, body weight, and medications can also influence the body’s ability to produce enough vitamin D (see box insert).

One factor in the widespread deficiency in recent years could be that people are living longer; as the body ages, it doesn’t produce vitamin D from the sun as efficiently. Two other possible contributors are a decline in the consumption of dairy products—one of the most common fortified foods—and the general increase in obesity rates.

Because activation can occur inside cells and organs, the activated form of vitamin D is not easy to measure or evaluate. Therefore, the recommended way is to measure how much 25-hydroxy vitamin D is in the bloodstream. This is a fairly stable measurement that indicates how much vitamin D is stored and ready to be activated.

Levels of 25-hydroxy vitamin D are measured in nanograms per milliliter (ng/mL) with “normal” levels starting around 20 ng/mL. However, many researchers and healthcare practitioners now believe that the optimal range may actually be 1.5 to 3 times that amount. Talk to your healthcare practitioner about ordering this test to determine your personal level before starting any supplement.

Keep in mind, because of seasonal differences in the sunshine, testing in the late winter will typically yield your lowest level, and testing in late fall will establish your peak level. Any supplementation should be monitored and adjusted for seasonal variations.

Many people who are deficient in vitamin D exhibit symptoms that are easily confused with other conditions such as chronic pain in muscles, joints, and bones, and may be misdiagnosed as fibromyalgia, chronic fatigue, or myalgia. Muscle weakness, which may also be associated with low vitamin D levels, is apparent when a person has a hard time standing from a seated position or walks unsteadily. Another symptom, osteomalacia, is evident when pain is caused by pressure being applied to the breast bone. This softening of the bone may contribute to a higher risk of falling and an increased chance of bone breaks.

Seasonal affective disorder (SAD) is another potential sign of deficiency. SAD may be misdiagnosed as depression or bipolar disorder and is often remedied by exposure to sunshine, UVB rays, or vitamin D. Other signs of deficiency include chronic diseases, such as periodontal disease, loose teeth, and high blood pressure. A compromised resistance to infection may also be associated with inadequate vitamin D, a critical factor for immune system function.

Who’s at Risk for Deficiency?

Dr. Ellie Campbell noted that many of her female patients who were struggling with infertility also tested remarkably low in vitamin D. When these women were given supplements to restore their levels, they were able to get pregnant. Women who breastfeed may deplete their reserves; subsequently, their breastfed infants also tend to be deficient.

Dr. Campbell reports polycystic ovary syndrome (PCOS), another prevalent cause of infertility, is also associated with low vitamin D levels. In addition, premenstrual syndrome (PMS) and dysfunctional bleeding may be connected with this deficiency. Several studies have also shown that deficiency is common among post-menopausal women, probably due to age-related decline in vitamin D production, as well as changes in body composition (see chart).

Most sources recommend exposure to the sun as the best source of vitamin D. Unfortunately, it is possible to damage the skin by burning before enough of this hormone is produced, so it is important to avoid over­exposure. Dr. Holick’s book, Vitamin D Deficiency, recommends approximately ten to fifteen minutes of daily exposure to the midday sun with bared arms and legs.

For many people, optimal vitamin D levels may require a combination of sun exposure, dietary sources, and possibly supplements. The D3 that is identical to the sun-activated vitamin D in the human body is only available from animal sources. The richest dietary sources of D3 are organ meats, skin, fat, and eggs, which are often excluded in modern diets. Pork, beef, mutton, goat, and fish can also be dietary sources; however, muscle meat contains less than the richest sources listed above. Pigs create vitamin D from the sun in the same way as human beings. Ruminant animals such as cows, sheep, and goats get vitamin D from eating green grasses or lichen, while fish get it from eating algae. Having recognized the danger of rickets and osteomalacia, many governments allow for the fortification of foods with D2 or D3. For example, small amounts of vitamin D are often added to milk and orange juice.

Although vitamin D can be obtained from vegetable sources such as mushrooms, lichen, and yeast, it is in the form of D2 instead of D3. D3 is the type the body produces in response to sun exposure, while D2 is not. The Vitamin D Council recommends taking D3 rather than D2 because studies have shown it to be more effective in raising 25-hydroxyvitamin D levels.

Supplements of D2 or D3 are also available by prescription and over-the-counter. Vitamin D can be administered as an injection, applied to the skin, or taken orally. Oral supplements absorb best when taken with a fatty meal. Most multivitamins and standard vitamin D tablets contain 400 IU per day, an amount that some say is insufficient for most people. According to Dr. Holick, much evidence suggests the recommended D3 intake needs to be increased to 800–1,000 IU per day. Dr. John Cannell maintains that adults with no sun exposure may require up to 4,000 IU per day, depending on their size and skin color

Smaller trials and observational studies suggest that optimizing vitamin D levels may help prevent a wide range of diseases, including:

With its many roles in the body and its amazing potential to support health, “the sunshine hormone” is the subject of much ongoing research. Research shows that vitamin D contributes significantly to overall health throughout the stages of life. With adequate and sensible sun exposure, dietary sources, and supplements as needed, optimizing vitamin D levels appears to offer real health benefits. To achieve these benefits, it is important to work with a healthcare practitioner to monitor your levels.

Copyright © January 2017, Reviewed and Edited 2018, Women’s International Pharmacy. This newsletter may be printed and photocopied for educational purposes, provided that your copy (or copies) include full copyright and contact information.