Starting a Conversation About Vaginal Health

We thought about calling this newsletter “The Happy Vagina,” but wondered if people would be too embarrassed to read it. This prompted a discussion of how difficult it is to talk about vaginal health in today’s society. Even with all the strides we’ve made in women’s health, most women are still uncomfortable talking about problems “down there” and can’t even bring themselves to say the word “vagina,” much less celebrate that part of our anatomy that makes us distinctly female.

This reluctance partially stems from the lack of good, reliable medical information available about the female genitalia. In The V Book, Dr. Elizabeth Stewart states that “popular thinking has mirrored the medical community’s indifference. For much of the twentieth century, women’s genitals remained mired in ignorance and shame, as had been the case for hundreds of years.” But that is beginning to change and we intend to encourage that change. 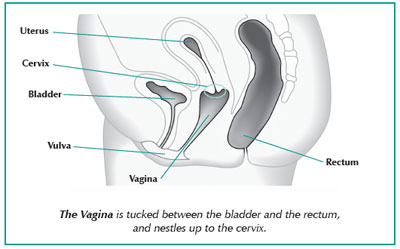 Most women refer to everything between their legs as their “vagina,” but this is not really accurate. The vagina is inside the body cavity and cannot be seen (except for the vaginal opening) without special equipment. The parts we can see (the external genitalia) make up the vulva. Hence the term, vulvovaginal, which refers to both the vulva and vagina because it is difficult to talk about the health of one without also including the other.

Dr. Stewart, one of the first vulvovaginal specialists, encourages women to look at their genital area, using a mirror, to identify what’s there and to know what it should look like. She emphasizes that while “private parts are meant to stay private,” your private parts shouldn’t be foreign to you. You should be intimately familiar with them so that you can detect when there’s a problem and communicate the symptoms effectively with your practitioner. Dr. Stewart notes that “Using a precise vocabulary is the first step to better care.”

The figures below depict the external female genital anatomy; don’t be alarmed if yours doesn’t look exactly like the drawings. Just as our ears and toes are all slightly different, our genitalia also have variations that make each of us unique.

The vagina is a tube-like cavity with its opening (the introitus) in the vulva and terminating with a “blind pouch” that wraps around the cervix, as shown in the figure below. A thin wall separates the vagina from the bladder and rectum. The size of the vagina varies from one woman to the next, but average length is about 2 1⁄2 to 3 inches. 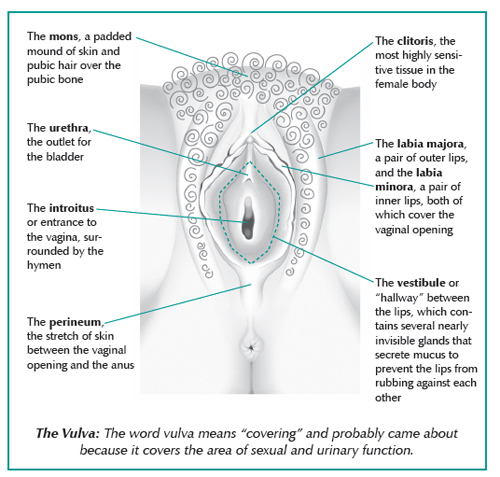 Vaginal tissue is different than that found in the vulva, and is most similar to the tissue found inside the mouth. The tissue around the opening of the vagina is like the tissue of the urethra, with lots of receptors for testosterone and the estrogen hormones. The vaginal walls contain muscles that allow the vagina to expand and contract to accommodate something as slender as a tampon during menstruation, or as large as a baby during childbirth. In its relaxed state, with nothing inside it, the vaginal walls collapse against each other. The vaginal muscles are not within your control, but the pelvic muscles around the vaginal opening are. They hold the pelvic organs in place, help control urinary flow, and can affect sexual enjoyment.

The main functions of the vagina are to:

This last function is critical to maintaining vaginal health. In Dr. Stewart’s words, “The vagina is a uniquely specialized thoroughfare. It performs more specialized functions than most organs of the body. Penises, tampons, and doctors’ speculums go in. Babies and menstrual flow pass out. Yet for all this traffic, the vagina is as delicate as it is hardy.” Vaginal health depends on a “precarious biological balance among the many bacteria that dwell naturally within. It’s the disruption of this balance that often leads to vaginitis.”

Vaginitis is any infection, irritation, or inflammation of the vagina or vulva. It can be caused by a multitude of things, including bacteria, parasites, yeast, an irritant, a hormone imbalance or a foreign object (see Primary Factors below). Lifestyle factors such as wearing tight pants or nylon pantyhose, using spermicides or douches, having poor dietary habits or being under constant stress can also contribute to vaginitis.

The symptoms of vaginitis are usually described as itching, burning, or both, and are often accompanied by an abnormal, foul smelling discharge (see Discharges below). The itching and burning may occur at any time but are usually most troublesome at night. The burning sometimes feels like a bladder infection, becoming worse during urination or sexual intercourse. The vulva may take on a bright reddish color.

Even though vaginitis accounts for millions of office visits each year, many women are reluctant to seek help or, once they get to their appointment, too embarrassed to discuss their symptoms. That can be a dangerous and life-altering decision.

If left untreated, vaginitis can lead to more serious problems such as pelvic inflammatory disease (PID), which can scar the fallopian tubes and lead to infertility or an ectopic pregnancy where a fertilized egg becomes implanted outside the uterus. Therefore, it is best to seek help from your healthcare practitioner to determine the cause of your vaginitis. Over-the- counter remedies might make the problem worse, especially if they simply mask the symptoms but do not treat the underlying cause.

The most common causes of vaginitis are infectious organisms such as Gardnerella vaginalis (a bacterium that doesn’t like oxygen), Candida (a yeast fungus) or the parasite Trichomonas vaginalis, of which the last two are sexually transmitted. Other sexually transmitted causes include bacteria such as Neisseria gonorrhea and Chlamydia trachomatis, genital warts, and the herpes virus.

Your healthcare practitioner will most likely perform a physical examination and one or more tests to determine the appropriate treatment for your specific type of vaginitis. Tests may include an acid-base balance (pH test), a whiff test, a vaginal smear, a yeast culture or skin scraping. If you have a lump, rash or ulcer, biopsy of a small sample of skin may be necessary. A Pap test is used for evaluating cervical cells, not for diagnosing vaginitis.

Vulvodynia is another health problem that may affect the genitalia. It is described as a spontaneous, generalized pain in the vulvar area, characterized by a stinging, burning, or raw sensation, which may or may not be associated with a form of vaginitis. For some women, the pain is chronic.

Some researchers and practitioners believe that vulvodynia may be related to or caused by a chronic yeast infection. In The Yeast Connection Handbook, Dr. William Crook states that vulvodynia may be similar to other chronic health conditions, such as endometriosis and chronic fatigue syndrome, in that it probably has multiple causes. He poses the possibility that “Candida overgrowth in the gut may so disturb the intestinal membranes that food antigens, endotoxins, and enterotoxins present in the gut are absorbed, and they, in turn, adversely affect the urogenital system. Or … Candida itself may form potent toxins which cause immune system disturbances.”

Conventional treatments for vaginitis include antibiotics and/or antifungals, depending on the type of vaginitis. Yeast infections typically require a fairly lengthy schedule of oral antifungals, sometimes combined with topical treatments if symptoms are severe or persist. Over-the-counter antifungals work only on Candida albicans, but there are other non-albicans yeasts that may be present, and they are very persistent, so it is important to have an accurate diagnosis for the treatment to be effective.

Some healthcare practitioners believe that relying on conventional drugs can deepen the problem. For example, Goldberg recommends employing a variety of therapies “to eliminate vaginitis, prevent recurrence, and in the process improve your overall health by strengthening your body so infectious agents are dispatched with ease.”

Complementary therapies may include dietary changes, nutritional or herbal supplements, hormone therapies or supplements, and vaginal suppositories or douches.

A comprehensive treatment approach may be more effective than relying on over-the-counter remedies or conventional therapies alone.

Different dietary guidelines may apply, depending on the type of vaginitis. “Vaginitis caused by Trichomonas responds best to fasting, while treatment of bacterial vaginosis requires eliminating all foods which may produce an allergic reaction,” says Dr. Tori Hudson (in Goldberg).

Supplements of vitamins A, C, E and the B vitamins will help keep the body strong enough to fight off vaginal infections.

Probiotics, which are supplements of “friendly” bacteria such as Lactobacillus acidophilus, are another common recommendation for treating candidal vaginitis. Probiotics can help “steer your body toward proper digestion, thereby increasing your body’s ability to stay healthy from the inside” says David Dodart (from Goldberg).

Herbs such as goldenseal, which acts as an antifungal, echinacea, which builds the immune system, and phytolacca (pokeweed), which draws toxins from the body, may also help the body avoid infection.

Vaginal suppositories and douches are popular treatments for vaginitis, but there is considerable controversy as to their effectiveness. They seem to be most effective when used in conjunction with the dietary, nutritional and lifestyle changes mentioned previously.

Suppositories are usually herbal or vitamin-based mixtures of friendly bacteria or essential oils. Typical combinations include boric acid, herbs such as goldenseal and marigold, or garlic. Douches or mixtures of antiseptic herbs such as St. John’s wort, goldenseal and echinacea, or other substances such as plantain, garlic and grapefruit seed extract are also common homeopathic treatments.

It is normal for a woman to have some vulvovaginal discharge during the reproductive years. This discharge may include oil, sweat, and secretions from glands in the vulva; moisture that comes through the vaginal walls; mucus from the cervix; byproducts from the bacteria that live in the vagina; and saline, the solution that makes up most of our bodily fluids.

This normal discharge is usually clear or slightly cloudy, non-irritating, and odor-free. The amount and consistency of the discharge may vary with the menstrual cycle, and during menopause, as estrogen levels fluctuate. Stress can also cause an increase in the discharge flow.

During ovulation, the amount may increase or its consistency may be a little thicker. Some women have premenstrual brown spots of old blood in their discharge, or spotting in between periods. Spotting should be explored with your healthcare practitioner.

A vaginal discharge that has a foul odor or is irritating usually signals some sort of problem. It is important to see your healthcare practitioner right away if there has been a change in the amount, appearance, or smell of your vaginal discharge. The most commonly observed types of discharge and what they usually mean are summarized below.

Which one you use and how often depends on the type of vaginitis you have. Douches are generally not recommended for yeast infections. Because douching can actually make symptoms worse, it is best to consult with your healthcare practitioner first to see which one is best for your condition. Never douche before visiting your practitioner for diagnosis as it may mask or alter your test results.

Your vaginal health mirrors your overall health in many ways. If you are experiencing a problem with your vulva or vagina, take it seriously. Take the time to figure out what is going on, communicate with your healthcare practitioner, and take the appropriate steps toward treatment. Your body will thank you for it.

Primary Factors that Contribute to Vaginitis

This publication is distributed with the understanding that it does not constitute medical advice for individual problems. Although material is intended to be accurate, proper medical advice should be sought from a competent healthcare professional.

Copyright © Women’s International Pharmacy. This newsletter may be printed and photocopied for educational purposes, provided that your copy(s) include full copyright and contact information.